Auguste Piccard will sich kurz vor seinem zweiten Stratosphaerenflug nicht von den Medien fotografieren lassen, aufgenommen im August 1932 in Duebendorf, Schweiz. (KEYSTONE/IBA-ARCHIV/Str) Auguste Piccard tries to avoid getting photographed by the media before his second balloon flight to the stratosphere, pictured in Duebendorf, Switzerland, in August 1932. Auguste Piccard (1884-1962) was a physicist, inventor and explorer. An interest in ballooning and a curiosity about the upper atmosphere led him to design and construct a spherical, pressurized aluminum gondola which would allow him to ascend to great altitude without requiring a pressure suit in 1930. Piccard and a Belgian engineer reached a record altitude of 15'785 m on May 27, 1931. During this flight, Piccard was able to gather substantial data on the stratosphere. Piccard and a Belgian physicist made a second record-breaking ascent to 16'200 m on August 18, 1932. In the mid-1930s, Piccard's interests shifted when he realized that a modification of some of his atmospheric balloon concepts would allow to descend into the deep ocean and he designed a small steel gondola to withstand great external pressure. Piccard and his son built the improved Bathyscaphe Trieste in 1953. (KEYSTONE/IBA-ARCHIV/Str) 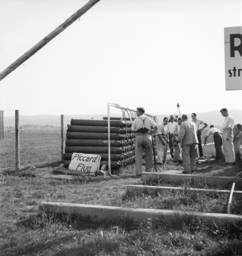 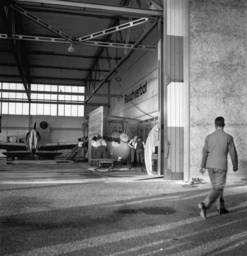